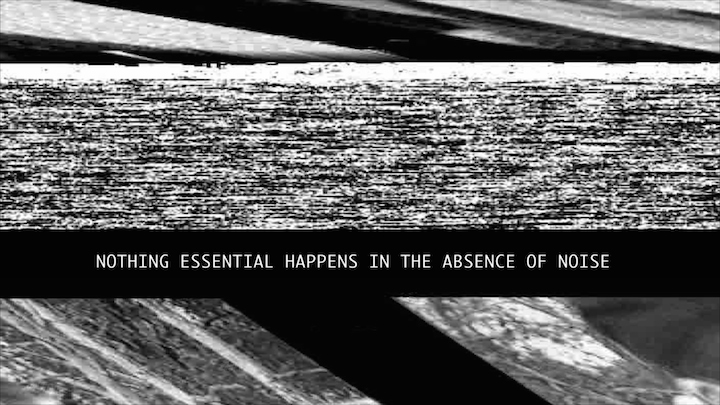 Nothing Essential Happens in the Absence of Noise – SilBia, 23 mins, 2015
Nothing Essential Happens in the Absence of Noise is a documentary manifesto about the noise label Praxis Records. Founded in 1994 in London by Christoph Fringeli, Praxis has been active for more than 20 years mixing political engagement with breakcore music and rave parties. Shot mainly in VHS and mixed with animations and degraded film materials, the film is a essay on the origins of breakcore and on the developments of the illegal party scene of the last years.
The film is now available on demand on the indie film platform RealEyz – click here for direct link.

“Silence exists only in dead spaces like the void of the desert, the depths of abyss, the sidereal space, the acoustic sterility of soundproofed rooms, or in the grave. It was said in the sixties that the sound of silence is that of incommunicability and isolation, that which grows like a cancer. In fact, nothing essential happens in the absence of noise. From the very beginning, universe explodes into existence at the supreme sound of the Big Bang. We are all born screaming. Revolutions blast out, as the unstoppable entropy of all things.”

“The word breakcore has been used for the first time in 1992, to describe hardcore music in 4/4 with the addition of disrupted rhythmical schemes, made with the purpose of pushing further the boundaries of techno genre. A continuous sound of acid rain, an analogical storm, reminding of the sound of a nanny breaking her hips or of wolves howling at the sky in icy winter.”

“Breakcore stands out with its absence of aesthetic charms that could attract the culture industry. No business can be built on noise.”